I seriously suck at grieving! I don’t know how to handle it. I don’t even know how to commiserate with the bereaved. My Exes would believe I do not care they left me. I mean, someone decided to leave and I have to beg them not to? Unless there is a fight that needs apologies and clarities. I’m not looking for who to tell me how bad. But, I just don’t know how to. I have learnt from many sources that there is no right or wrong way to grief. Maybe that is why some people don’t know how to deal with their losses. I shared my huge discovery here, click to read. 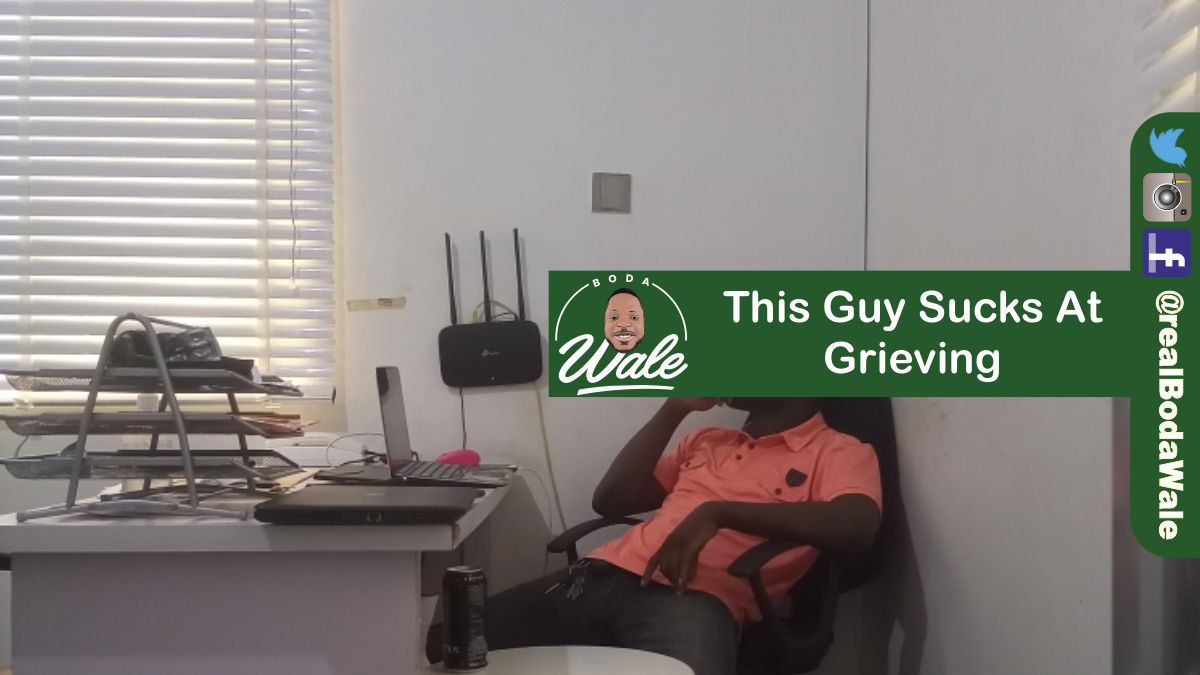 Sucks at grieving, but I care

Maybe the remaining memory I have of my sister is around being a cry-baby, a striking resemblance of my grandma while I was cut in between Father and Iya Yetty. Oh! I do eat her food. But, oh girl, she was strong and such a Beaute. And I know how to tease her perfectly. I was not there when she died, they just brought the atmosphere to my house, trying to hide such a loss.

I found out long enough before they were aware that I am not that easy to fool. I didn’t hate the death that took her, I felt she got to rest from that sickness that won’t let her show those teeth often. I didn’t know what to tell my mum. I don’t even remember how she processed her grief. Many years later, I will just randomly see her face, a smiling Beaute, like a trance. Then I guessed to just let it out and move on. So I started wrapping her around a certain joke about being a part-time Angel that watches over me.

Check out:  Life Principles to Live By Everyday

If death is an actual being. Maybe S/He could identify me after so many years. Maybe S/He have been trying to make it up to me by sparing me, sometimes at its own shallow. If this being gets to use the internet and stumble on this blog, I would like to just point out this; YOU CAN NEVER MAKE IT UP TO ME. I deeply hope she is actually resting without any knowledge of this world whatsoever. Rest in Peace Omobukola mi Ashabi.

During the 90s, I was a little boy who found a big sister in one of our Landlord’s daughters. Aunty Ramota (Rahmat) as everybody call her, including my mum, could send me all the errand in the world and I won’t feel a thing that is tilted towards bad. Maybe I love her, maybe I just wanted to be a good errand boy while growing up. 🤣🤣

Not like she gives me money or pampers me. However, while the Landlord body lies next to our sitting room window downstairs, I sometimes find the sitting room upstairs, which has his giant picture hung on the wall, my second home when our 3 rooms are empty. I never met the man, he either left when we were still toddlers or before we were born. But the many days I spent in his parlour seems like I have met him before.

I am either been served bread or taking free extra lessons. You can call it a home lesson none of my parents knew. You may say it’s not so free as I attend to customers who call to buy bread from her once in a while. Abeebu oni buredi loke. Now, I figured I was somewhere around 9 based on other things I could recollect around that time. Aunty Ramota was probably in her late 30s or 40s then, my memory of hers was that of an old single lady with no known partner, friend, or kids. God, maybe she led a lonely life.

Check out:  4 Magical Traits to Make Your Romantic Relationship Work

One morning, a bird Yoruba people refer to as KOOWE visited our house at Jaiyeola George street and did its thing – koowe ke, o ko, ko ha! (that’s one of the ways the Yoruba announce the death, especially, of someone dear or important). It was a hell of a morning, at least, to everybody else except me. I can’t remember feeling anything really when my mum said Aunty Rahmata is dead. I was just surprised that she was okay yesterday, how is that even possible.

I find my way to the sitting room to check her, somehow nobody stopped me till I entered the sitting room where she lies. Really, you’re dead like that? Wow! I thought. I saw the small trumpet I left in there the previous day. I, without reading the atmosphere, went to the verandah and blew the trumpet. Agowale like me.🤔. My father probably tried beating me into grieving like other normal people or, at least, pretend to be grieving. Little did he know that I just don’t make any sense of the crying and wailing. Neither am I really good at with the words to console the most pained.

I think I found a way around processing grief. Although, might not work for other weird people. Talk to someone about it, share it when giving a lecture, if it’s still painful, let it be known. If you are not the one that can cry or appear to be grieving, just talk about it, in some cases, with others that were affected.